[The actual print is not at hand so this description is written from a  not very clear photograph. If I see the print again, I might revise this description.] This print is unique for Château de Filières [actually, as of October 18, 2015, it is not].

Behind her is a sturdy table with oblong container with a penzai tree in it. Two doors lead out to a stoned path leading through a wooded area.

On the wall hangs a board with the inscription 鳳子歡呼樂嵗朝 fengzi huanhu le suizhao and a signature 吳門管瑞玉寫 wumen Guan Ruiyü xie   [Thank you Sören Edgren for deciphering the characters]. 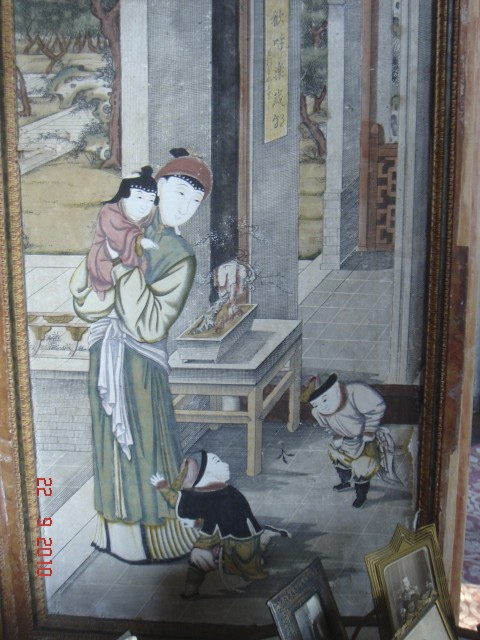 This print, Afang gong tu, Image of the Afang Palace, is the right part of a pair or diptych and emanates from the Henri Vever Collection and sold at Sothebys in London June 7th, 1994, lot 153. Afang Palace was in Xi’an and one of the most famous palace complexes in Chinese history, originally built in 212 BC.

2015-09-28 We have also since learned that there are seven examples of this print on the walls of the Small Chinese Salon at Esterházy Palace.

Collector and researcher of old Chinese woodblock prints
View all posts by chiwoopri →
This entry was posted in chinese prints, Suzhou prints, woodblock. Bookmark the permalink.