Three Gusu Prints in the Round

Three small Gusu (Suzhou) prints in my collection show influences from Western prints. All three are round prints, a rather unusual format, circa 25 cm in diameter. No other prints of this kind have been documented or published. The first shows four figures respectfully greeting two figures arriving on a boat, one an elderly bearded sage holding a tall staff, with five tassels hanging from it, and the other younger and smaller, perhaps an assistant. Both wear black headgears in the style of wushamao 烏紗帽, the hat worn by Ming officials, with flaps standing straight out and up, like ‘Mickey Mouse’ ears. The younger fellow’s hat however lacks the upright flap at the back.

Three of the adoring figures are of Central Asian origin judging from their dress and hair styles, not unlike those of tribute carriers seen in some Suzhou prints. The two bald headed front-most figures offer coral branches while the third figure raises his joined hands under his sleeves. This last man wears an elaborate hat and a bushy beard. The fourth figure is Chinese and female, she also raises her hands under her sleeves. Her ornate headdress features two long peacock feathers. Maybe she represents Magu, 麻姑 the Daoist immortal, offering longevity. Coral branch (珊瑚 shanhu) and peacock feathers (花翎 hualing) can also symbolize May you achieve the highest official rank (翎頂輝煌 lingding huihuang or 紅頂花翎 hongding hualing).

There is apparently a message in this print, but the correct reading is difficult. What is the meaning of depicting Central Asian figures? Why the Chinese female? Why revive a Ming-style hat? Who are the persons wearing these hats?  My initial impression to this print was that it was Christian. The italianate buildings in the background on the other side of the water is clearly a European pastiche, the wushamao is similar to the hat worn by Matteo Ricci’s most important convert, Paul Hsu, as illustrated in Athanasius Kircher’s China monumentis…illustrata, 1667. 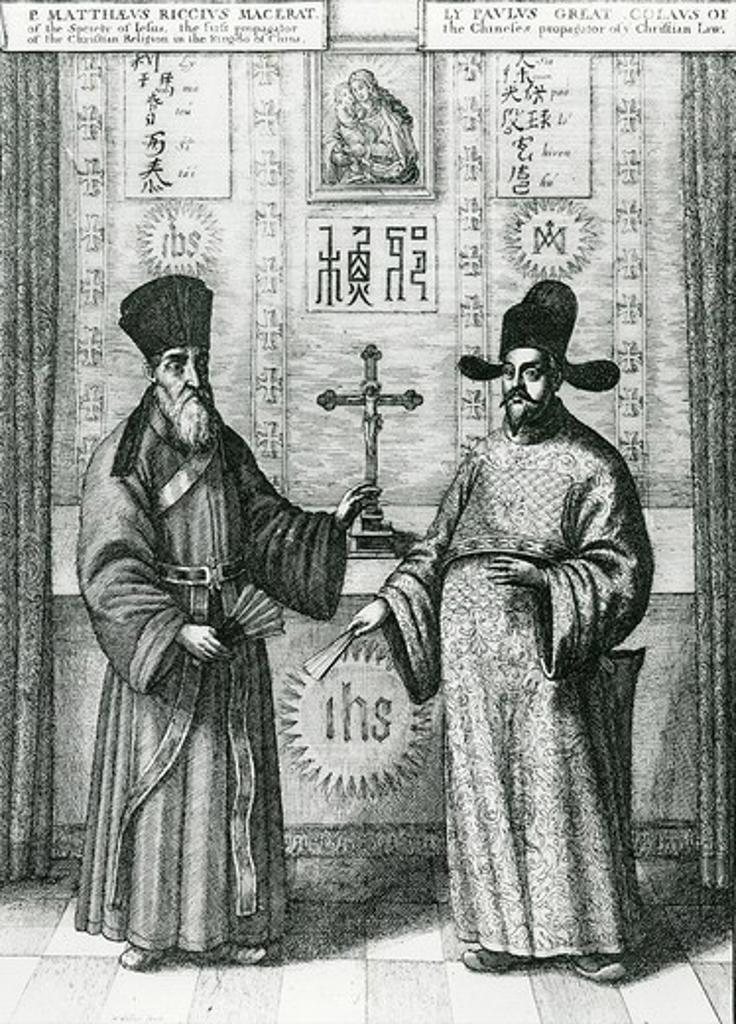 The bearded person on the arriving boat is of biblical magnitude and stature. What we have here is is possibly a piece of surreptitious Christian propaganda, showing how the arrival of the faith by boat is welcomed by all people of Asia.

The second and third prints are more secular in spirit and perhaps form a pair, considering they have the arches of a tower building in common. The round openings are also showing the inner edges of the wall through which we see the scenes. In the right-hand print we see the right inner edge and for the left we see the left inner edge, as if we were standing in front, between the prints, and looking at them right and left. Or is it as seen through a pair of binoculars, although this would be a very early use in China of such instrument? The right-hand print’s edge has been cross-hatched, just as in the Christian print above. Another Western feature in these prints is the perspective angles of the motifs: in the left-hand print the angle of the lines run towards the right, and in the right-hand print towards the left. The colours of these two prints look as if applied later, perhaps in Europe. The faces are painted pink, with red markings on chin, mouth and nose, and the eyes are small crossed dots, all features uncommon for Chinese colouring of prints.

The left print shows an arched bridge over which some riders are preparing to cross. On the other bank and in the background are some buildings. The right-hand print, besides the half-arch of a tower, shows a pailou 牌樓, a three-arched gate, by the bank of a lake. Some boats are moored on the bank, one being discharged of its cargo. In the distant background is seen another bridge and some buildings. Birds fly in scattered formations in the sky in both prints.

The inscription on the left print reads: Yüfeng Guan Lian bi 玉峰管聯筆 and on the right: Yüfeng Guan Lian xie yu Yanyunxuan 玉峰管聯寫於硯雲軒, which translates to Brushed by Guan Lian from Yüfeng and Written in the Ink-stone Cloud Studio by Guan Lian from Yüfeng. Traditionally Yüfeng 玉峰, Jade Peak, is associated with the Imperial Summer Palace in Beijing, but we can assume that Guan Lian was not from there, but from some other place with the similar name in Zhejiang. We know of two other occurrences where Guan Lian has signed prints: the Han Gong Chunxiao (汉宫春晓 View of Han Palace in Early Spring) and Afang Gongtu (阿房宫圖 Afang Palace).

The Han Gong Chunxiao was discussed earlier in this blog ([More on West Lake Panorama]). In all four of these inscribed prints we see the same bare mountains, often striated to give volume and perspective, the similar formations of open-V flying birds, and the somewhat sprawling writing. Three of the prints start with the same six characters 玉峰管聯寫於 but then the last three differs: 硯雲軒, 研雲居, and 雲水閣 (Yanyunxuan Ink-stone Cloud Studio, Yanyunju Cloud Research Home, and Yunshuige Cloudy Lake Pavilion). In all cases yun, cloud, is involved and some kind of abode is implied. Yanyun is used twice, but with different characters for yan. Guan Lian was perhaps a humorous artist amusing himself by signing with the same sounding characters but always with different meaning. We need to find more prints by him to verify this theory. There is an occurence of Guan Lian’s name in the 杭州府志 (Hangzhou Gazetteer, Qianlong edition). He is named as a military official, from Haining County, Zhejiang Province, so presumably a different Guan Lian from our artist although with the same characters.

The Afang Palace and the Han Palace are signed in the margin by Guan Ruiyü 管瑞玉, who we have seen also designed the West Lake Panorama, the Pingyuan Weilie, and the series of Gusu Beauties discussed earlier in this blog. Accordingly, it is very tempting to attribute the two round prints signed Guan Lian to this same Guan Ruiyü. After all, Guan Lian might just be another name, a zi, for Guan Ruiyü. While we are speculating, we might as well assume that the round Christian print was also executed by Guan Ruiyü for two reasons: the round format, the cross-hatching of the edge in the opening, and the fact that this print was bought at an auction sale together with Han Gong Chunxiao. I readily admit that the latter is very speculative but it would not be impossible that Guan Ruiyü gave or sold these two prints to some European, who then brought them to Europe where they remained together until they surfaced in the auction sale. Unfortunately, it is not possible to find out anything about the provenance of the prints, sadly a general trait for most Chinese prints. A Western pen has written C7.inv(?) and C8.inv(?) in the margin and p.2.2. on the back of the prints, so maybe they have belonged to a larger set in an European collection.

The above mentioned smaller-sized prints, including the West Lake Panorama prints and the Afang Palace, together with some prints at the Kupferstich-Kabinett in Dresden, comprise a group of Gusu prints executed in various tones of black and grey in imitation of copper engravings or grisaille prints. This was done intentionally in order to give the prints a Western flavour and thus satisfy the strong demand at the time for images in the European style. Judging by the number of prints extant with this trait, the fashion and fancy for such prints was considerable. The fortuitous fact that the Dresden prints were inventoried 1738 gives us a rough idea of the date of all these prints.

Collector and researcher of old Chinese woodblock prints
View all posts by chiwoopri →
This entry was posted in chinese prints, Suzhou prints. Bookmark the permalink.