Anita Wang, Wang Xiaoming, has pointed out some mistakes in my previous entry and has also contributed some very pertinent information which warrants an article of its own.

These are Anita’s words, with slight editing on my part:

“According to the Suzhou Gazetteer, Suzhou Fuzhi苏州府志, Shijia xiang 史家巷 was the name of a street located in central Suzhou nearby Daxin xiang 大新巷 Church, and this indicates the influence of Catholic activity in the area. 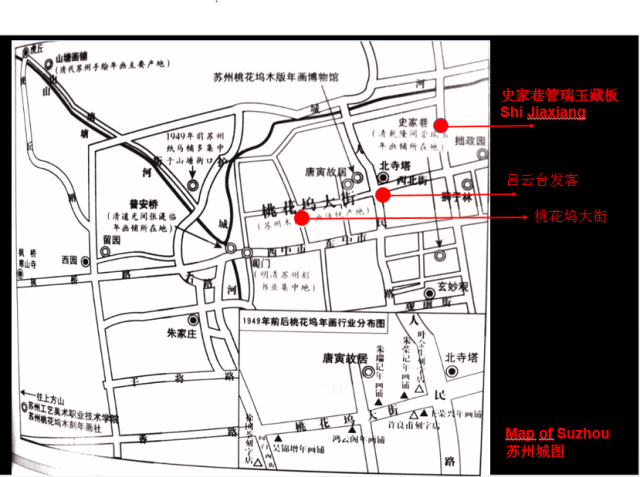 Furthermore, in the collection of the Umi Mori Art Museum another print, which forms the pair with the print Afang Palace, has the following written on the top: Yufeng Guanlian Xieyu Yanyun Ju 玉峰管联写于研云居

I think these observations give us a broader perspective on the activities of the print studios, and geographically anchors Guan Ruiyü’s studio around the corner from the main Taohuawu Street.

“I think these black and white prints were not the complete version selling in Chinese market, they were meant to be painted with colours like the print Pingyuan Weilie (平原圍獵).

In Chinese tradition, the uncoloured prints were definitely not popular to be used as the house wall decorations, they were possibly only bought by European merchants.”

Also a very interesting observation. Presumably an uncoloured print would be cheaper to purchase than a coloured one.

Dating of the Chaloner prints

We do not have the benefit of a date on the Chaloner or Douce prints, but if one is allowed to make a comparison with another print in a private Japanese collection we arrive to about the 1730s. This print, entitled tai xi wu ma tu 泰西五马图 or Western Picture of Five Horses, shows all the same traits as the Chaloner and Douce prints – view of West Lake, similar size, western style copper engraving imitation, etc.

This print is dated 壬子, which is equivalent to the 10th year of the yongzheng reign, or 1732. It should be mentioned that a Japanese exhibition catalogue dates this print to 17921 but I believe, as do two recent Chinese publications2, that it belongs to the first half of the eighteenth century.

Thank you, Anita, and I hope to receive more comments and contributions from other readers.

Collector and researcher of old Chinese woodblock prints
View all posts by chiwoopri →
This entry was posted in chinese prints. Bookmark the permalink.